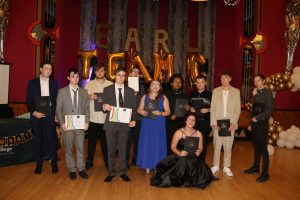 A college for students with autism have been rewarded for their efforts after achieving their learning goals to ‘lead, believe, achieve and exceed’.

In the first awards, learners at Harrison College, Doncaster, were treated to a glittering extravaganza at the Earl of Doncaster hotel.

Principal Gemma Peebles, who founded the specialist college more than three years ago, outlined to guests how far the students had come on a journey of academic and personal development. “I could not be prouder of the achievements of #teamHC,” she said. “As a college we have grown from three to 45 students and are expecting even more next year. “We have been shortlisted for multiple SEN awards, won Business Start Up of the Year at the Doncaster Chamber Business Awards, Regional Game Changer, and this year we have already won Specialist College of the Year with Prestige Awards. All this recognition is testament to the amazing things that go one each day at Harrison College.”

She praised the students for embodying the college’s principles of leadership, belief, achievement and the ability to exceed expectations, all of which prepared students for the world of work. She also thanked parents and carers for their support. Students were presented with academic certificates and also given a gift from the college that would help them in their new jobs or internships. All graduates from the Class of 2022 have gone on to employment, further education or training, including Will Smith securing an apprenticeship with St Leger Homes, 2 graduates being employed by Absolute Recovery and 1 student taking on a traineeship with Hannah’s Happy Hounds.

Managing director of Orb Recruitment Stewart Olsen presented the special ethos prizes. Nathaniel Blair took the ‘Lead’ prize for exhibiting leadership skills in and out of college and taking responsibility for his own learning, furthering his understanding and capability in CAD design, so that he was ready to take on an internship with Wilmott Dixon. Harry Turner won the ‘Believe’ accolade for overcoming obstacles, for recognising there was “something greater inside him” and for his achievements on his internship in warehousing and distribution at Polypipe. The ‘Achieve’ award went to Oliver Derbyshire for overcoming barriers and challenges during his time at college and on an internship as a data analyst with Edwards & Pearce, as well as securing a job with Absolute Recovery. Will Smith secured the ‘Exceed’ award for striving to boost his self-confidence and achieve the first step towards his dream of being a property developer by securing an apprenticeship with St Leger Homes.

Student of the year, for demonstrating all four values, was Tom Wedgwood. Mrs Peebles said: “Once Tom started his soil chemistry internship at PSL he impressed with his attitude to work, ability to problem solve, willingness to learn and adaptability. Within a couple of months they contacted us asking when Tom would be available for employment as he had already improved productivity in the lab. Tom has been working for PSL since April and is now a full-time lab technician.”

Also receiving applause were Reece Chan, Nat Bennett-McBride, Malachi Brown, Rhianna Jackson, Rhys Quidington, Grace Hurst and Ben McGarey. Gemma Peebles added: “We have amazing students, fantastic staff and the great support of parents, carers and business mentors. It has been an incredible journey so far and I’m delighted that team Harrison College continues to grow in so many ways.”